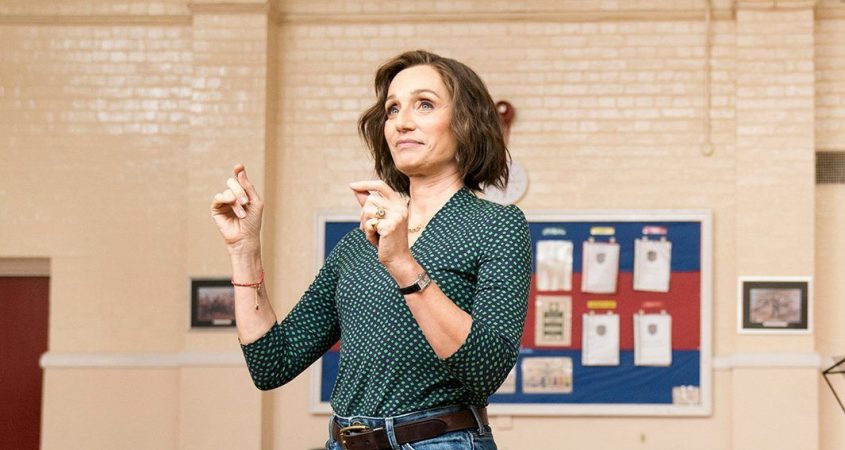 Military Wives is a glimpse into the largely unrecognised complexities of the lives of partners of combatants in the armed forces. We acknowledge the enormity of what serving personnel face in conflict, and recognise that partners waiting behind probably have a hard time of it, but few understand just what such partners face as they go about their lives waiting for every scrap of news, raising their children to believe that daddy is safe and will come home, whilst keeping in check their dread of an official knock on the door.

Military Wives opens as serving personnel are being deployed for six months to Afghanistan.  Relationships are stripped bare as each partner faces his or her inner fears and seeks to provide reassurance to the other.  Not all such attempts have the desired outcome, revealing early some of the challenges couples and families face in these situations.

ow that they’ve been left behind on a largely deserted military base, a kind of hum-drum sets in, and the wives slip into familiar patterns of behaviour.  As it happens, Kate (Kristin Scott Thomas) is to hand over the duties of running the social club to Lisa (Sharon Horgan).  Unfortunately, Kate and Lisa are polar opposites, and Kate, unable to let go of her long-held position running the club, interferes and railroads Lisa at every turn.  When one of the wives raises the idea of singing, Kate and Lisa enter into a very uneasy partnership to create the resultant choir.

Through the tumults, griefs, fears, and triumphs, the women find something much greater than the huge success the choir goes on to enjoy: they find their shared humanity and, through forgiveness and acceptance, the meaning of true friendship.

Kristin Scott Thomas’s Kate is snobby, cold, and superior — and a tremendous foil for the equally strong but laidback and easy-to-get-along-with Lisa, portrayed with great veracity by Sharon Horgan.  The rest of the cast do an admirable job depicting how each manages, with good humour born of experience, the tough situation she faces.  The film may be predictable, but it is moving and heart-warming, and a worthy revelation of part of the price of armed conflict.