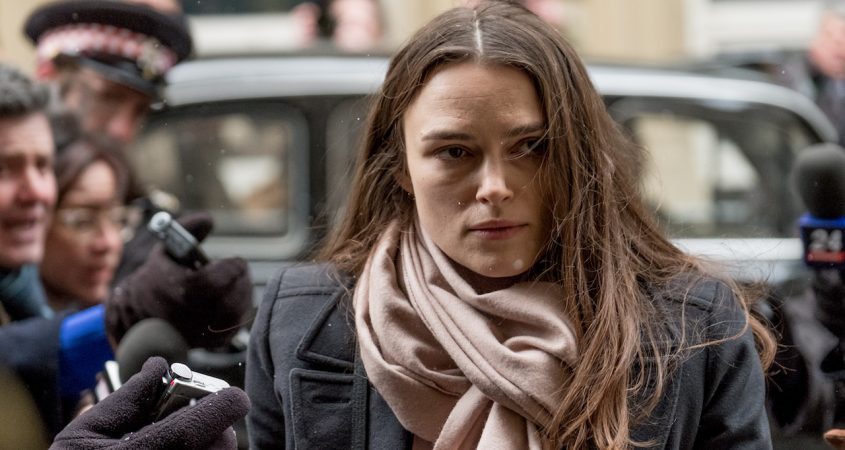 With the benefit of a factual basis in a sequence of official deceits of the public by three western national governments, Official Secrets follows the repercussions of a decision to leak to the press a conspiracy to corrupt a UN Security Council vote on prosecuting a second US-led invasion of Iraq.

Katharine Gün (Kiera Knightley), a conscientious translator–analyst in the British Intelligence organisation Government Communications Headquarters (GCHQ), receives a directive to all staff to meet a US National Security Agency request to obtain, by spying on UN Security Council delegates, “the whole gamut of information that could give US policymakers an edge” — meaning blackmail.  Gün can’t stand by to see thousands of innocent Iraqis bombed in an illegal war, and at great personal risk she leaks the request to somebody who passes it to investigative reporter Martin Bright (Matt Smith), on The Observer.

At The Observer, Bright checks the document’s legitimacy and fights for the paper to report on it despite the stance its editor, Roger Alton, has given the paper in favour of the war.  Bright eventually succeeds in convincing Alton that the story is important, and the front-page headline creates waves world wide, though it fails to shake the politicians beating the war drums.

That is, in a nutshell, what actually occurred, though the repercussions for Gün personally are less widely appreciated.

Official Secrets dramatises remarkably well Gün’s difficult decisions not only to leak the information but also to confess to having done so, and the aftermath of that confession for her, her husband, and her legal advisors, including a long wait to learn whether she would be charged under the tightened Official Secrets Act.  And it paints an interesting picture of the newsroom in which key players had to decide whether to put their own necks on the line in order to tell the truth, and recaptures the global outrage at the plainly unjustified invasion juggernaut.

Well plotted, and using the articulate Gün’s own words (e.g. “I work for the British people. I do not gather intelligence so the government can lie to the British people”) to define what was at stake, the film brings back with immediacy what was obvious to so many at the time: that the vague “intelligence” that British, the Americans, and the Australians claimed as a basis for invasion was utter fabrication. Filmed immaculately, this superbly acted film may be the best reminder you’ve yet seen of the necessity for open, functioning democracy, with parliament, judiciary, and press independent of government, in order to call to account the brokers of the surveillance state.