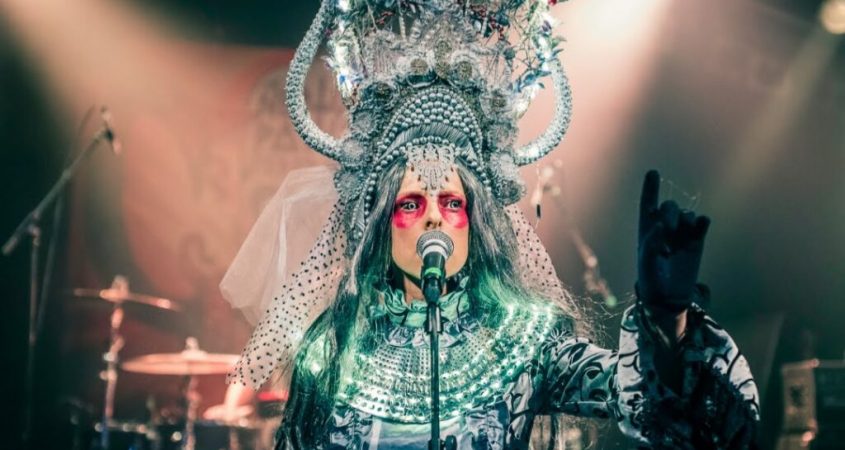 The band have been around most of the decade and Memoirs… is album number four, coming relatively quickly on the heels of their 2017 effort Neath a Shin Ei Sun. What happened in the interim is that the band have absolutely written their bits off, producing the best songs to date on what was already solid bedrock.

What’s helped shape this is the sheer amount of touring off the back of album three, including a trip to Europe that saw the band crush Germany and get picked up by Cruz Del Sur Music.

It’s also in the nature and scope of these shows, because if you haven’t seen the band live yet, you’ll not appreciate how just nut balls amazing they’ve become in terms of presentation over that time.

The key to this is not in the blokes, who are awesome and on fire on this record, but the world class talent of vocalist, and for the sake of formalities of the review her majesty’s full official title, The Imperial Princess, Screaming Loz Such (TIPSLS hereon).

TIPSLS has the best stage wear of pretty much any performer ever, such that should TIPSLS choose to perform in a box in the dark on the side of stage her vocals would still command fealty from all in her imperial presence.

The theatre of her presentation almost has rung through into this record. It feels like the greatest ‘70s glam rock musical ever written, like if Hair was written not by a bunch of hippies but a malevolent space monarchy with TIPSLS in front of four well drilled storm troopers.

Kicking off with Can You Dig and a suitably spacy intro into an off-beat glam riff T-Rex would be proud to furnish, you will absolutely belt out “YES” in answer to the question posed in the chorus.

Watch Our Masters Bleed brings that musical theatre flavour to the verses, but crushes the chorus to balance it out from straying too much into thespian territory. This is a killer rock ‘n’ roll album first and foremost after all.

That said, the song writing, production, and scope of the eight songs on offer here are spatial in terms of blending the classic rock backing with some killer keyboard sounds, acoustic interludes, and electronic soundscapes in between killer riffs and some of Scerri’s blistering best on the guitar solos. I’ll Make a Man Out Of You evidences this well.

The keyboards on Pagan Inclinations also serve to add some Deep Purple to the spectrum of this record that is resting itself comfortably in the ‘70s without being a tired rehash of ‘90s stoner rock. I have read comparisons of these guys to Wolfmother and I will take the stomping riffage on The Reaper Comes For Thee over that tripe any day.

TIPSLS’s vocals are absolutely a tour de space force, layering perfect backing vocals to compliment her main vocal line melodies. They soar just as well solo, such as the intro to Flying Incendiary Club for Subjugating Demons, before blending most all of the bag of tricks throughout the rest of the song in a way that is simply killer.

I can’t recommend enough for you to catch a live performance from these guys. In fact, it is essential. Their previous work has all been great, but with Memoirs of a Rat Queen, The Neptune Power Federation have finally delivered an album of songs that are as exciting and vital as their live show.