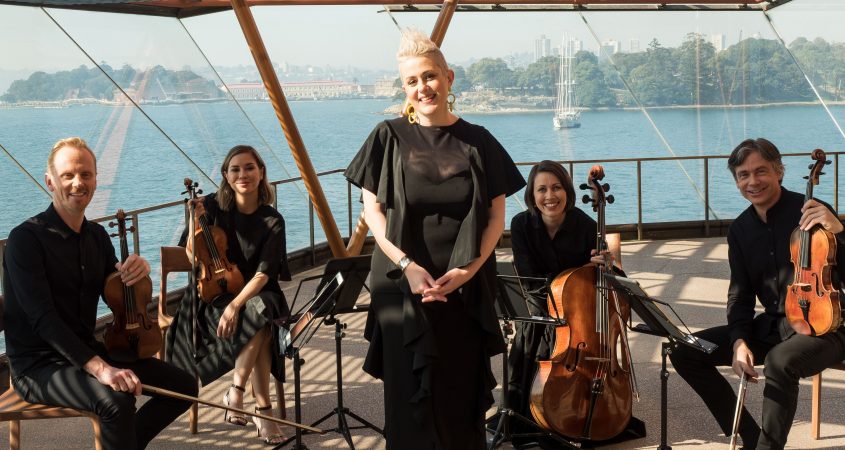 To our fathers’ fathers
The pain, the sorrow;
To our children’s children
The glad tomorrow.

These are the final words in Oodgeroo Noonuccal’s poem, A Song of Hope. They are also the final words of a song of the same name on Katie Noonan’s most recent record, The Glad Tomorrow. This project sees Noonan come together with the Australian String Quartet (ASQ) to perform a song cycle based on Oodgeroo’s poetry.

Having previously made a record based on the poetry of Judith Wright (of whom Noonuccal was a close friend) with the Brodsky Quartet called With Love & Fury, Noonan sees this current album as a follow up.

“I started thinking – wouldn’t it be great to celebrate Oodgeroo’s work with her writing because she is arguably the greatest Indigenous poet in Australia.”

Oodgeroo was from Quandamooka country, Minjerribah, commonly known to many as North Stradbroke Island. A fiercely proud Queenslander, Katie wanted to ensure that the project had a strong Queensland “DNA”.

“North Stradbroke Island is a very special part of the world for me…it’s where I write most of my songs and I’ve always felt a very deep connection to that country,” says Katie.

Five of the ten composers Katie has commissioned to write this piece are from Queensland. Having admired the work of ASQ for a long time, it seemed especially fitting for Katie to work with them on The Glad Tomorrow when the two most recent additions to this musical foursome – first violin, Dale Barltrop, and second violin, Francesca Hiew – were from Brisbane.

As already mentioned, this is not the first time Noonan has set music to poetry, nor will it be the last. In fact, this will be the fifth of 19 albums that Noonan plans to produce, based on the work of her most beloved poets.

When asked where the idea came from to pair her love of poetry with music, Katie said: “I think I always had a deep respect for the power of the written word because my dad is a journalist…and I loved reading ancient words, whether it be Shakespeare or… I remember falling hardcore in love with John Keats when I was a teenager, and really loving great poetry. I guess I’ve always had an appetite for writing excellence.”

Katie also states that, unlike other musicians, singers are given the opportunity to use text and therefore, “have this extraordinary tool at our disposal to add to our musical language.”

This will be Katie’s first time performing with the Australian String Quartet. After first hearing strings used in a non-classical way by artists like Björk and Elvis Costello, Noonan was, “really fascinated with the amazing way you could use a string quartet…it’s a beautiful colour palette to play with”.

Katie has also collaborated with members of Noonaccul’s family on this project. Oodgeroo’s great-granddaughter, Kaleenah Edwards, will be joining the tour to read each of the poems in Jandai language at every performance. Oodgeroo’s grandson, songman Joshua Walker, and Quandamooka Yoolooburrabee Aboriginal Corporation (QYAC) have assisted with the translations.

This performance will undoubtedly be a magnificent work on many levels. With so many factors of artistic excellence coming together in the one project – Noonan’s voice, a stellar array of composers, the brilliant ASQ and, of course, Oodgeroo Noonuccal’s poems – this tour will undoubtedly be of world-class quality.

However, the thing that stands out most about this project, musical mastery aside, is Noonan’s desire to share the works of an artist who had visions for a better future for all Australians.

“Overwhelmingly, Oodgeroo’s poetry does offer hope, and she did earnestly believe that true reconciliation was coming and is possible, as do I. And, that there will be a Glad Tomorrow.”

The Glad Tomorrow is on at the Canberra Theatre Centre on Saturday, 9 November at 8pm. Tickets prices range from $55-$65 and are available online at canberratheatrecentre.com.au