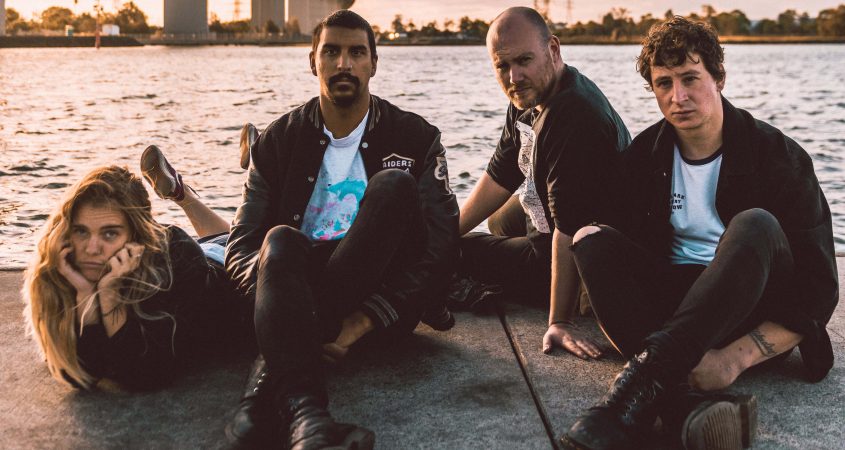 Melbourne-based punks PRESS CLUB have wowed audiences with the energy and aggression of their live shows and have just launched sophomore LP Wasted Energy. BMA spoke to lead singer Natalie Foster to hear what has been happening since the band’s appearance at last year’s Yours and Owls Festival in Wollongong.

“Heaps! Heaps! “ Foster enthuses. “We’ve been overseas twice, recorded another album, and then we’ll be back in Australia in November for a big tour.”

Press Club’s new LP was written straight after the debut, so the band obviously has a lot of creative energy it wants to express.

“When we get into a writing mood, we just thrive off of it and it’s just what we live and breathe for a couple of months,” Foster reveals. “Songwriting is a whole-of-band exercise, generally starting with one riff, and an entire song is developed from there.

“The band tried recording all instruments live at the same time for the first album and were happy with the results. The same ethos was kept for the second album. We recorded live to tape to get a more authentic feel. The live performance is such a strong point in what we do and from the beginning we knew our recordings had to capture that.”

Asked how Wasted Energy differed from their debut, Foster says: “We just stepped it up a little bit. We’ve got better in terms of songwriting, and the recording quality steps up in how it sounds.”

Foster strove to capture her vocal grittiness during the recording process rather than relying on post-production.

Regarding song messages, the broad theme of change applied across the album, including topics of breaking free, finding yourself, and society’s need to change.

“In the first album I gained a lot more inspiration from friends, and their stories around me, while in this one most of it is a lot more personal,” Foster reveals.

The track Behave relates to expectations placed on people in general, although it also has a particular meaning for Foster.

“As a female, there are certain things people say I should do. Maybe I could get fiery if I wore a leather skirt or had more rips in my top, but I don’t think anyone should be told what to do or how to think. How people express themselves is unique to them.”

That being said, Foster is ambivalent about the meanings of some songs, as she believes that people should draw their own interpretations.

The reception that Press Club has received overseas, including at the Reading and Leeds Festivals, has been overwhelming, and the band is ready and rearing to bring that energy home.