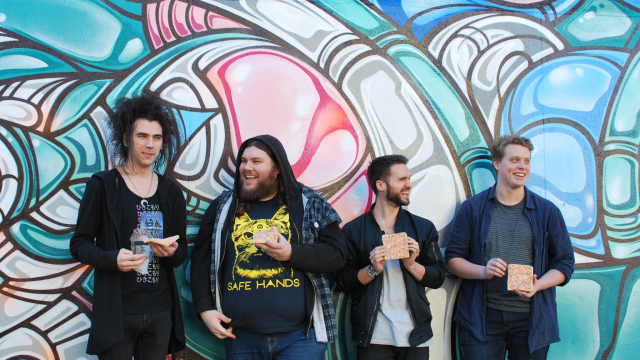 2014 marked 25 years of Triple J’s endlessly interesting musical anthropological democracy, the Hottest 100. It also triggered an idea in one of Australia’s most voracious music fans David James Young to recruit thee mates, Adam Buncher, Andrew McDonald, and Nathan Harrison to review every song from every countdown ever, five songs at a time, with the top ten at the end of each year in a podcast entitled Hottest 100s and 1000s.

David (or DJY as per his twitter handle) has notoriety as Australia’s most gig attending punter , as well as being a music journalist, musician and podcast content creating savant whom I interviewed to get the story on the show.

“Andrew and Nathan were school mates and Adam and I were South Coast kids who grew up together,” David says. “I went to Uni with Andrew at Uni of Wollongong and we graduated the same year. Shortly after I was at a gig in Sydney at the Vic on the Park and Andrew was there and introduced me to Nathan and Adam and we’ve been good friends since. When I came up with the idea for the show, these were the mates I wanted to do this with.”

If my maths is right (unlikely given I’m terrible at it) the gang have been going for five years and just finished 1998’s countdown in their last episode. So with 20 years at five songs an episode each week with the exception of the top 10 which they do in a single hit, it should take about ten years for them to catch up to the Hottest 100 at the 2029. Is this the logical end of the podcast or will their be strategic spacing to stretch this out?

“Well one of the main reasons we wanted to do this was that we’d never be short of material,” David reveals. “There’s an endless stream of content and material that comes with the history of the Hottest 100 so it’s going to keep us occupied for some time, and it has for the last five years. It’s kind of weird looking down the barrel of the end of the ’90s after so long.”

The last episode’s top ten features DJY giving an impassioned review of the Ben Lee song Cigarettes Will Kill You as it was a watershed moment in his life and triggered a deep passion for music. That said being rooted in the music of the ’90s for half a decade, has there been any nostalgia fatigue being stuck there for so long?

“It’s funny because the more “recent” the songs are the more nostalgic we get,” David says, “because the songs from the 1993 and 94 countdowns feature a lot that, being in our late 20s, we just hadn’t heard of before.

“As the countdown goes on we are connecting more to where we started getting into music as much as I am now.

“So ever year there are songs that you know like the back of your hand and you hardly have to do any research, and thankfully we’re getting into more familiar territory now.”

The podcast has received attention from some of the alumni of the countdown with Lindsay “The Doctor” McDougall helping out on some of the more obscure areas of deep ’90s research and facts, as well as some love online from Jebediah frontman Kevin Mitchell.

The guys are bringing the podcast to the Canberra Theatre Centre on the 8th of February with DJ Jemist kicking off at 5:30pm and the podcast recording at 7pm.