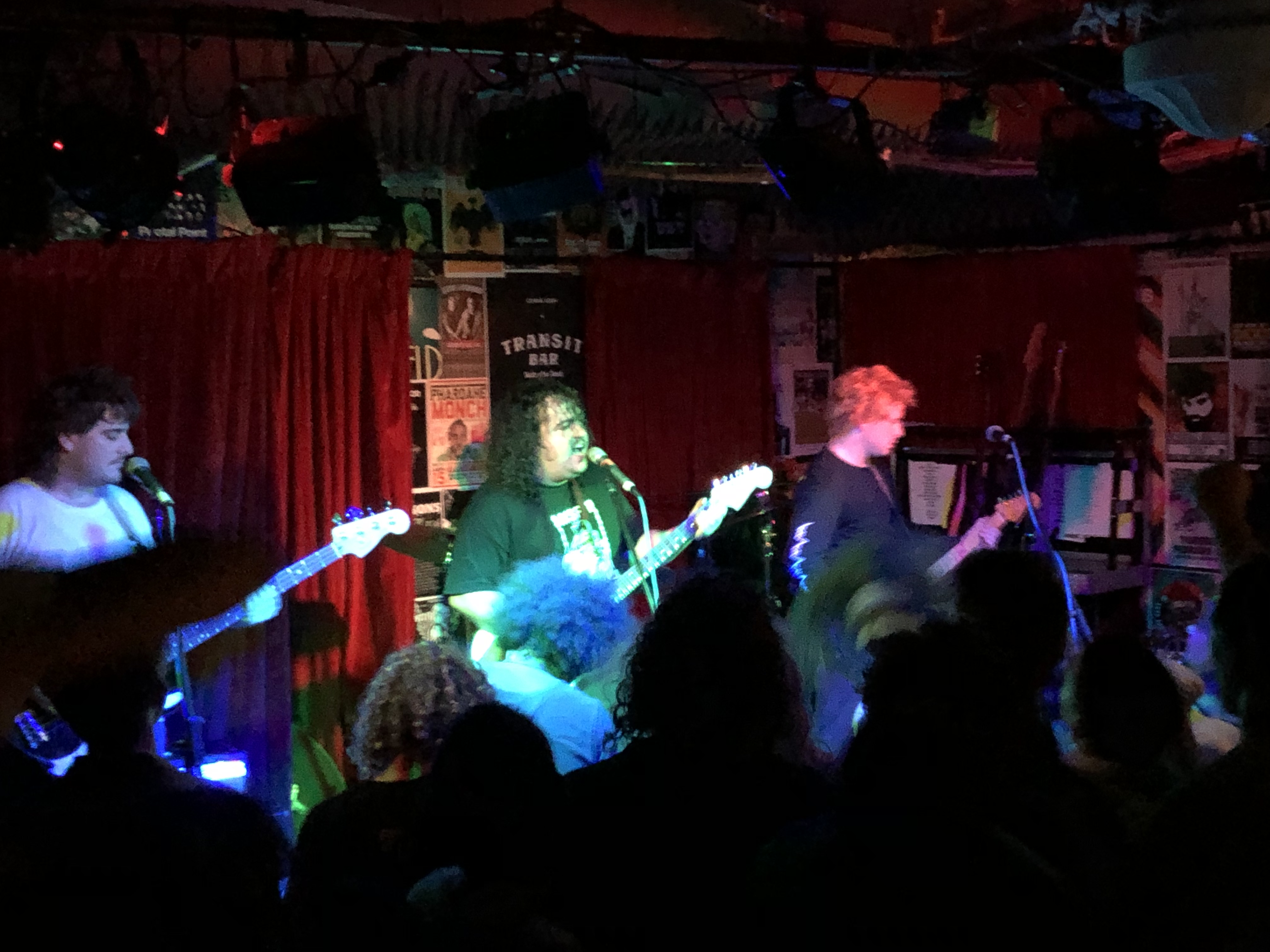 It was awesome to see a long queue of punters out front of Transit as I turned the corner from Garema Place just before 8pm.

The promise from the venue of free energy drinks and Vodka for the first 20 in, and the fact that this monster lineup was sold out except for a handful of tickets on the door, would explain the scene. It set the tone early for a high energy, high value night of great Australian music in the capital.

Openers Me Me and The Desert Pills from The Blue Mountains hit the stage early to capitalise on the vibe and performed to a packed crowd front stage. The two piece have a garage rock sound that initially reminded me of Bleeding Knees Club or Skeggs but as they pulled out some more melodic tunes towards the end of their set I got flashbacks of The Grates. The fact that they are a two piece, female led group with high energy could have also contributed to this. Regardless, they were a prime warm-up for our double headliners.

As my gig buddy and I debated our preferences between the two acts I was pleasantly surprised when The Chats hit the stage next.

It appeared the majority of the crowd were here to see them, and the Youtube success of Smoko generates more of a diverse crowd than you may expect at a local punk show.

The group have a stack of other great tunes on top of their “commercial hit” and the packed crowd knew it as they immediately jumped around and chanted along to How Many Do You Do.

Bus Money was another mosher before they pulled out Smoko about three quarters in, generating a frenzy. Having spent my last Chats gig in that frenzy at Rad Bar last year, standing a bit further back this time allowed me to appreciate their music more and especially realise the talent in their lead riffs.

When they threw in Best Person In The World for me and I could chant along to “everybody else looks like a pedo”, and then did Temperature as their encore closer after a mini stage break, I had to agree with my buddy that they are just as great as the Pisty’s, who were about to come on.

What is it about Pist Idiots that we love so much? Is it their humble origins as a band who came about after being dared to play a covers set at a party? Their laid back look and lack of pretension? Or their unique mix of fast, (almost) hardcore tunes mixed with slow melodic tunes?

Whatever it may be, you can’t resist being drawn in once they hit a stage (which I’m guessing happened to a few folk who had maybe ‘stayed around’ after The Chats tonight). There was still a furore up front with just a bit more space providing the chance to enjoy this mix of mood and pace they bring.

Surry Hills, Smile and Fuck Off had strong reactions from the crowd and set the mosh alive, but I loved it when they brought things back down a bit with Princes and 99 Bottles coming in between the faster tunes.

By the time they gave us the official closer Leave It At That they had rounded out their set (and the night) perfectly with its brilliant mix of classic Oz rock, melody, rhythm and emotion.

You just felt so damn lucky to have been there.