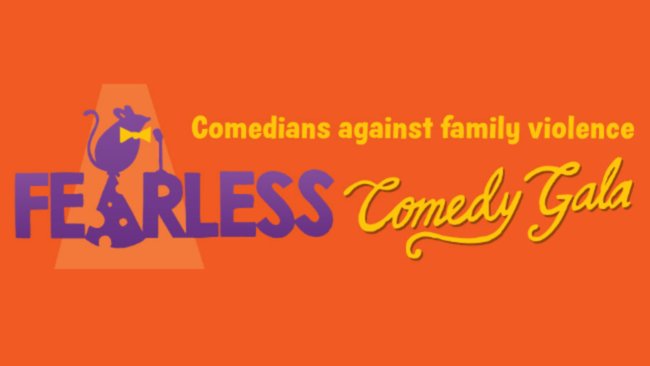 The Fearless Comedy Gala, which raises funds for the survivors of family and domestic violence, returned for its third year, with comedians donating their talents for this great cause.

The night began with the surprise inclusion of a terrific dance sequence by Canberra’s own Project One hip hop team. Veteran comedian Jean Kittson, our MC for the evening, hailed the recent abolition of the ‘tampon tax’, only regretting that it had arrived too late for those post-menopausal women present in the audience. Former contestant from ‘The Batchelor’, Sasha, was the work experience MC, helping with the night’s charity raffle. He had punters searching under their seats for a nonexistent lucky door prize.

The first comedian off the blocks was Tom Gibson, whose ability to see the quirky side in everyday urban life enlightened us on the funnier aspects of supermarket trolley rage and Action Bus bike racks.

Aidan Mungai explained the challenges in doing a comedy routine for African immigrants who spoke little English, while Tessa Waters’ physical comedy brought terror to a punter siting in the thrill seekers’ section of any comedy event (the front row). He was forced to wrap himself around Waters, before having to play his part in a hula hoop mime cat.

Ryan Coffey used a loop pedal to over-dub vocal effects and lyrics in his song about the things in life that turn out to be harder than they should be.

30-year veteran Rachel Berger dressed up a serious message, about the disconnect between women and their bodies, with tales about feminine hygiene products, health food and cosmetic surgery.

Back from the interval, Kittson reminded us of the serious side of the night, speaking about the Stop It At the Start Campaign, which aims to nip domestic violence, which usually stems from disrespect, in the bud.

Canberra comedy heroes Sparrowfolk sang about the sexy side of tracky dacks and then used the contents of texts from punters’ mobiles (daringly passed onto the stage ‘unlocked’) to compose a song on the spot. They closed with the positive body image song ‘Love the Vagina You’re In’, accompanied by male dancers in pink body stockings with large fluffy vaginas.

Emo Parsonson from Wee Jasper took the rinse out of Canberra (an Aboriginal word meaning roadworks) and detailed his phobia of huntsman spiders in cars.

Chris Ryan gave a tale of woe about the need to embrace going gray and she was not embracing social media such as Instagram.

Dane Simpson played ‘The Hitchhiker’ on his ‘traveling’ didgeridoo (shaped like a pretzel), while Claire Hooper explained the damage done to life by having children.

Founder of the Fearless initiative, Juliet Moody, emphasised the urgent need to change attitudes to family violence, before the evening closed with a dance-off between Project One and the comedy team.

It is good to see that the Gala has become a regular annual event. It provides a great opportunity to support a very worthy cause, while getting a whole heap of laughs from a varied line-up of comedians, including well known artists and up and coming stars.