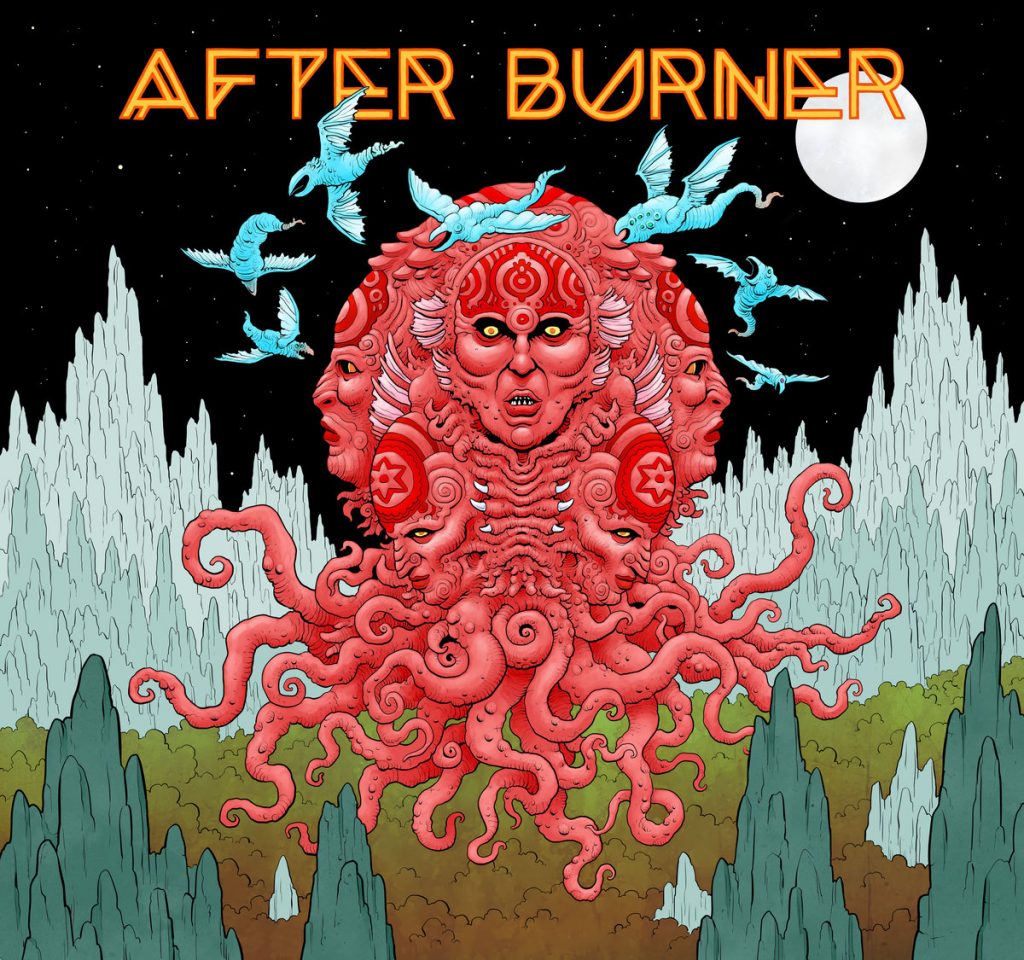 Afterburner are a new Melbourne crossover thrash band that have arrived with a line up that comprises as it seems with all Melbourne bands, of the members of a number of other awesome bands. Fuck…I’m Dead, The Kill, Bodyjar, MYC, Join the Amish etc.

Afterburner are old school crossover thrash through and through. Guitarist Chris Dee, whom puts in an album MVP performance throughout the 10 songs on offer on their self titled debut, has not hidden his love for Metallica and the other thrash gods of the 80s.

This is apparent from the acoustic intro to the album on opener Castle Crashers which quickly pulls the listener into the bulk of the rest of the record. Thrashtastic blistering tremlo and galloping riffs with face melting solos, over lots of crisp tight classic thrash beats, cymbal catches and occasional welcome vocal cameo’s from The Kill’s (and many more bands) Jay.

Grant jointly holds down the metronome with Jay on his bass, as formidable a rhythm section as I’ve heard in a while, especially with thrash tempos which can get a bit unwieldly if not played with the precision on display here.

Pete Alexander is on vocals and at first I wasn’t loving the super clean production on his vocals. The vocals seemed to lack aggression on par with the rest of the band and the break neck speed of the music.

That said on repeat listens, that feeling morphed into admiration for the cleanliness of his delivery.  Pete injects some memorably cool inflections like on the chorus for the Feast of Fools and meets the challenge of clearly articulating his lyrics over the breakneck pace of the tunes.

Being a gamer nerd and around the vintage of the lyrics, Home Before The Street Lights is a good example of connecting to Pete’s lyrics.  Of course there’s also requisite brutal subjects covered throughout  Morbid Cycle, Night Servant, and Primeval Permission.

I think Pete will shine in the live arena, and I put my early reservations to an otherwise super crisp and clean production that serves the band great overall in the context of the album.

Chris Dee closes the album on the track After Burner with some sweet Hetfield/Hammet inspired 3 or 4 or 5 part guitar harmonies and brings to a close a thoroughly enjoyable thrash ride that I am super keen to check out through the Riffbear label in the live arena soon.