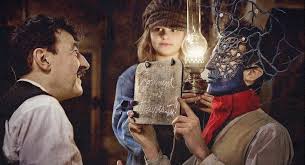 Of the many anti-war films I’ve seen, few reveal the truth of war and the evil a single individual can commit through abuse of the power it bestows, both during and after the conflict, over life and death. See You Up There juxtaposes the evil of one such man against the greater story of two other men and their unlikely friendship, forged in the catastrophic events of a WWI offensive in the trenches. With little in common, the two are bound together through the older man’s compassion for the younger, an artist, who has suffered horrific injuries.

The story is mostly set post WWI, with those who fought for their country barely able to eke out a living; medical supplies such as morphine in short supply; and the corrupt living off the fat of their corruption.

There are no war heroes here; rather, the story depicts a sustained heroism that we barely recognise; what one decent human is capable of when guided by the fundamental needs of another; and how war can render an artist’s brilliance both his curse and his salvation.

This thought-provoking and unusual film — visually sumptuous and cinematographically lavish — is not to be missed.