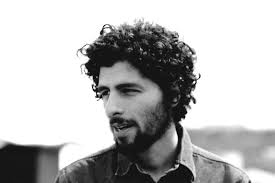 “Just having voice and guitar was really something important to me, to capture that feeling and sort of be okay with less.”

In another life, JOSÉ GONZÁLEZ might have been a scientist.

It seems like a world away from where he is today, but before the release of his first album, Veneer, González was on his way to a PhD in Biochemistry. “It was very serious,” he says to me, over the phone. “I did my Masters and went into a research group that was studying the copying of viruses.” After his music career took off, he left it all behind, but he admits that he still thinks about research – science is still part of his life. “I think that was a really close call.”

In fact, his academic path may have unintentionally had a hand in his success. In his teenage years, González listened to punk and played in a hardcore band. During that time, he was also learning the classical guitar that would become something of a trademark for him, and writing his own, chiefly finger picking, songs. “But the main thing that happened was that I was studying a lot, and I went to university to study microbiology, and that was taking up a lot of my time,” he explains. That, and the cost of recording, made it harder to record. “So I continued with my solo stuff and did my own recordings, but then leaving that hardcore music more and more.”

So it’s possible that if he had never taken up a PhD, his solo career may have never happened. That’s not to say González wouldn’t have made it as a musician in a hardcore band – it’s just another life that could have been.

Veneer was released almost 15 years ago, and in that time, González has gone global. You may have heard his work on Ben Stiller’s 2013 film The Secret Life of Walter Mitty, or the Life is Strange soundtrack, or just about anywhere by this point. He also continues to play in folk rock duo Junip, formed two decades ago now.

González has toured Australia quite a few times now, and attributes his frequent Australian appearances simply to the fact that Australia can’t get enough of him. “I think it was one of the places where people enjoyed the album the most,” he says. “And everytime we went there, it was beautiful weather, super nice hotels, good people, very laidback and friendly. And it was around the time we had the worst weather, January, February, when people here really get depressed. Nowadays people travel of course, but it’s an issue, the darkness, it really brings people down, and we got to escape that.”

Perhaps that wintry climate has something to do with his music having that intimate, dreamy quality, like he’s sitting in your room and singing to you directly. The issue of conveying intimacy through music, he says, is something he considered when he was writing his first album.

“I was listening to artists that had different versions for their songs. Some of them were just them alone with piano or guitar, and some versions with orchestration or a band. And of course sometimes that has to do with the crowding of sounds and so just having voice and guitar was really something important to me, to capture that feeling and sort of be okay with less. So since then, it’s been something I’ve tried to keep, to not add more unconsciously but deliberately. So that’s why I’m back in Australia playing solo,” he explains. “Usually it’s, the more opportunities you get to tour, it’s easy to just add more and have fun and make a bigger and bigger party. But then you forget about that, this part of music.”

That’s not to say he’s against a party (“We just went out with an orchestra and that was extremely produced, in a great way,” he adds), “but as I said, I think there’s my core style, and sort of going back to the old school version.”

González is deeply thoughtful about his music, and speaks at length on how he has crafted different songs, to tell a story or to take listeners on an emotional transportation. Take ‘Open Book’, which closes out his latest album, Vestiges and Claws. “It’s really short, but lyrically and the tone of my voice – I wanted to go from frustration or like, almost … not having any energy, and finding new meaning in the things around you,” he says. “So I think music is great and it’s a phenomenon.”

It has been a few years now since the last Jose González album, and for that matter, the last Junip album. You get the sense that González makes music that can’t be rushed, but of course, I owe it to myself to ask him: what’s next, anyway? His answer is, at first, satisfyingly vague: “I’m going to continue gathering ideas and putting them in my folder.” But diehard fans need not worry.

“What I’ve been working on lately is the release of the orchestra shows that we recorded and are playing together,” he continues. “Those are old songs of course but the versions are very interesting and different. It’s about two years between albums, between my solo albums, and then Junip, and then solo. So it’s like, sometime … without disturbing the schedule.”