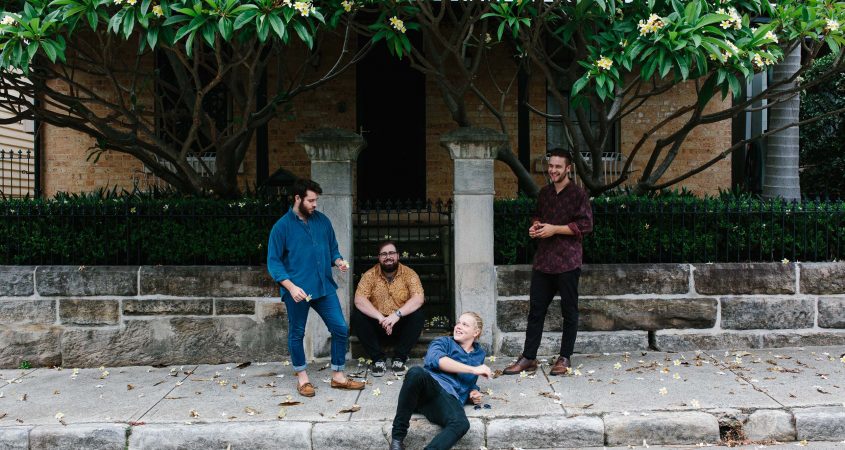 From early days of packing out The Phoenix, indie folk quartet THE GYPSY SCHOLARS have built an exuberant following around their live sound. Punters show up for high energy choruses, tongue-in-cheek lyrics and hearty crowd participation. If you’re at the front without raising a glass, dancing with a stranger, or losing ten percent body weight from sweat, you’re at the wrong venue.

Behind the scenes, however, the Scholars four – James Kelly, Conagh McMahon-Hogan, Joel Shapero and Alec Brinsmead – have been investing significantly in translation from stage to studio. Now mid-tour, excitement is building ahead of the release of the Cold Hands EP; Brinsmead is confident they’re onto something special.

“The live show is so important to what we do. We try and blow people’s socks off live. Trying to get that into recording is quite difficult, and yeah, definitely took some time.”

With this EP, I feel like we’re definitely on the right track, into translating what we do live onto the record

As the group’s drummer, Brinsmead generally finds himself in a good vantage point to listen to the sum of the parts and see the “bigger picture.” When McMahon-Hogan brought out the first iteration of what would become the title track, Brinsmead saw its potential immediately. “I think it was sold from like, you know, the first line. It was that kind of palm muted guitar, his voice comes in, I was like, this is a banger.”

The track bears the Scholars’ hallmarks: the narrative is quirky, but never contrived; the structure varied without losing its contour. There’s a give and take of vocal and instrumental elements, but a constant sense of ensemble.

However, weaving a unified product from an oversupply of creative options is easier said than done – in both the rehearsal and the recording environment.

“We’re in the unique position where we’ve got two lead singers [McMahon-Hogan and Kelly] who both write, and they both have different styles. There are a lot of similarities in the aspects of storytelling [but] not everything will ever sound the same.

“It’s definitely a group moulding process that we go through. Sometimes it’ll only be the verse and the chorus line that we take from the initial idea and you know, go away and write a separate bridge, change the feel.”

There’s a parallel symbiosis on stage – no one Scholar is a clear ‘frontman’. Each stands ready with a microphone, to layer rich harmony or trade witticisms and stories. There’s an art to the interplay in and of itself, and they manage it without treading on each other’s toes.

In the studio, the band has learnt to play to that strength (pun intended) and never tracks separately.

“We need that vibe, because we get so much energy. With the EP we were all playing at the same time, and then we’ll try and get as much stuff in that initial take, so you know it had that life and that bounce to it.”

The process relies on humility and openness. “The boys, it’s really good they’re not precious. As a songwriter, you have your ideas and you want it to sound like that you know, we’ll try an idea at least once. It’s a good environment to be in. You might cop some heat if you have a shit idea, but at least, you know, it’s always gonna be tried.

Even in the studio on the last day, going over the chorus, the way the melody was delivered and trying to get the feel right, I think we went through about four or five different feels. Conagh was very patient as well, me being like, this is not right, we can make this better.”

Accustomed to a menagerie of instruments on stage, fans could be forgiven for surprise that ‘Cold Hands’ is the first tune to feature both electric and acoustic guitar. Brinsmead laughs when I draw a light-hearted analogy to Bob Dylan’s controversial Newport Folk Festival show – “less profound with us, it’s kind of more like, yeah I guess we could do this! I think that might happen a bit more, two guitars.”

Meanwhile, the Cold Hands tour has seen increasing traction for the group up and down the east coast. At time of interview, they’re between a Newcastle debut and a double set at Manly institution, The Steyne.

Before hitting Canberra’s Polish Club for the official launch, Brinsmead will check a personal goal off his bucket list – the ANU O-Week stage. “That’s been a goal for me. Seeing like Presets and Peking Duck and those guys, to be able to actually play that gig is going to be huge.”

THE GYPSY SCHOLARS officially launch the Cold Hands EP at the Polish Club on February 24. The action kicks off from 8pm, with support from STRING ELEPHANTS, AN INCONVENIENT GROOVE and BEN KELLY. 18+, tickets $10+bf through Oztix, $20 on the door.

Support Jacqui Douglas on Patreon!
7% complete
When we reach $500 per month we will begin the official BMA Podcast. This will include interviews with some well-known musicians and artists, tips and tricks for publishing in print and online, as well as other discussion topics around Bands, Music and Arts in Canberra!