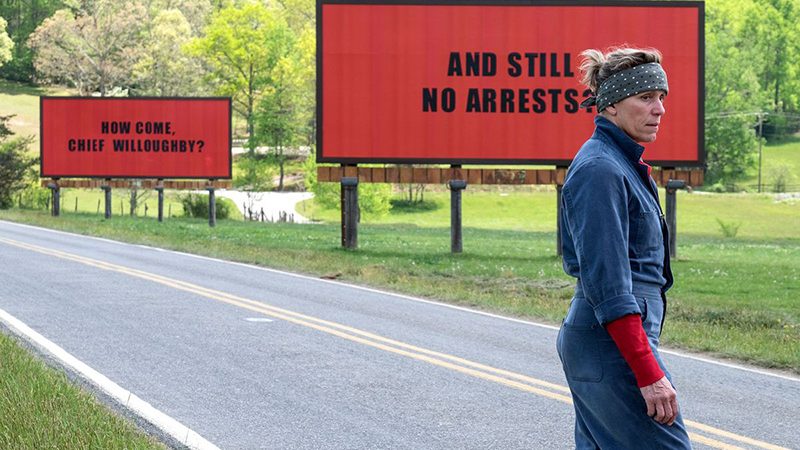 Mildred Hayes (Frances McDormand), is stony numb from grief; seven months after her daughter’s brutal murder, the town police are no closer to finding the killer. So she puts up three billboards on the road into town publicly confronting police chief Bill Willoughby (Woody Harrelson). Willoughby, in turn, has other things on his mind. But the billboards anger one of his men, Officer Jason Dixon (Sam Rockwell), who it turns out is angered by a lot of things.

And so begins a series of events tragic enough to serve as the foundation for some very effective dark humour. These events attest to a sensitively-written plot, complemented by some of the best acting of the past twelve months. The result is a story ballasted with the weight of utterly believable human emotion. The consequence is that the jokes are very funny indeed. Maybe this is life small-town America – so tragic that all you can do is laugh. Or maybe not.

It’s not until a couple of hours after leaving the cinema that you notice the film’s weaknesses – the heavy-handed caricatures and simple jokes (although, admittedly, nobody does wounded dignity quite like Peter Dinklage). This is the trick that Martin McDonagh and the cast have pulled off – for 115 minutes these are simply real people and their real lives in what might well be a real town. Three Billboards Outside Ebbing, Missouri is, if nothing else, a masterclass in execution.

One thought on “Three Billboards Outside Ebbing, Missouri”