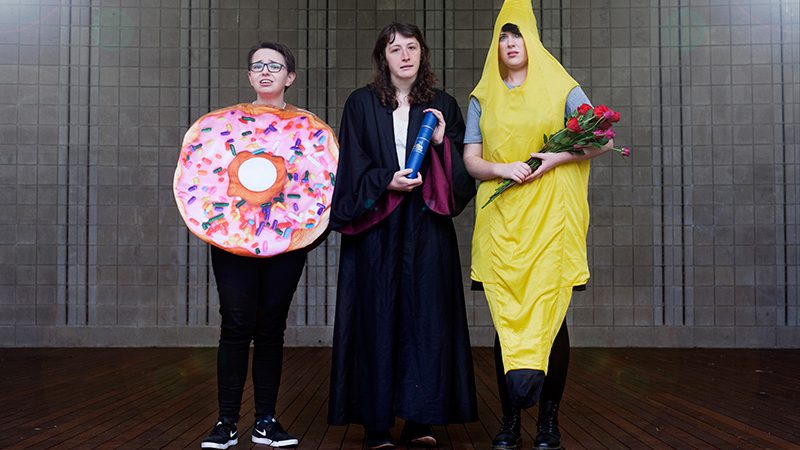 The Canberra Comedy Festival is known for importing gigantic names from all around the country and the world, with sold out shows giving plenty of opportunity for out-of-town giggle-chefs to preface their award-winning hours with hastily written material about roundabouts and The Government.

But the festival also books a bunch of cool local acts who are much cheaper on the carbon miles and much less likely to awkwardly mispronounce Manuka. I caught up with two shows worth of these local, organically grown free-range jesters and asked them to plug themselves and their shows.

Hi ANTHONY TOMIC, you are doing your first solo show at the festival this year – but what was your first experience of comedy as an audience member?
The first time I saw live comedy I went to an open mic with my best mate. I remember being blown away by the quality of the 12 or so performers that night (not taking the piss) but also how raw and positive the energy was. You could see they were having a great time (especially if there were laughs) and, even though a lot of the material may have been new or untested, if any of them were afraid or anxious I couldn’t tell at all. My love affair with live comedy was planted then, and I got into performing it myself a few months later.

Where do you do your comedy writing?

I create almost entirely in my head. I find it really difficult and intimidating to open a blank page and create from a standing start. Whenever I try to, and no ideas come out, I think to myself “why is it that I can write and perform anything I want, I can draw from infinity, and I still have no ideas?” Instead, I’m more or less always thinking about jokes and once I think something is fully formed or close to it, only then do I kind of put it down on a page as dot points.

Pitch your show to my Nan.

No but seriously I think it’s important to support local comedy and comedians who are trying to make that leap to festival shows and the like (and I feel particularly passionate about this when it coincides with supporting me)! As for my actual show, I mainly tell true stories, so I hope there will be a variety of parts that resonate or cater to most.

Why are you the creative visionary that Canberra needs?

I don’t think Canberra needs me specifically, but it does need comedy (all places do)! If I can contribute to the craft and people dig it, that’s all I can ask for!

You can see SCENIC ROUTE with ANTHONY TOMIC at Civic Pub on March 21 from 7pm.

Betsy Bailetti, Frances McNair and Maddy Weeks, you are doing a showcase performance called LOOK AT ME NOW MUM! at the festival, but how about you Answer My Questions Now, Friends! instead? Answer my questions if you agree.

Tell us about your first experience of comedy as an audience member.

[Maddy Weeks]: I first saw live stand-up comedy when I was 16 years old. I was sitting in the front row, and a comedy duo called Elbowskin kept picking on me for my age. They sang a song directly to me, that was exclusively about how all Mums have heaps of sex. I was sitting next to my mum. From that moment I knew that I must take my revenge by infiltrating the very industry that these two boys thrived in. And thus my journey into stand up begun.

[Frances McNair]: The first time I saw any kind of comedy I was five. It was a Hooly Doolies tribute band. They were terrible. They actually made some kids cry because they got frustrated they weren’t clapping in time. It was fucked. I think it’s shaped me to be the comedian and woman I am today.

[Betsy Bailetti]: First experience of live comedy was in a little club in Melbourne. It was a small room and very packed. Headliner was Ronny Chieng who was hilarious of course but the one who killed me was Oliver Clark wearing this vintage 70s suit and delivering every joke like he was crooning the crowd. He did like five minutes where he was just double-taking the audience and I cried.

Where do you do your comedy writing?

[Bailetti]: I’m usually super last minute so most of it is on my laptop on the way to an open mic, which is why I love open mics so much! They light a little fire under your butt and get you moving.

[McNair]: When I started I tried writing in cafes and parks because I thought it was kind of romantic and… I dunno… French? All the good stuff comes when I’m at home alone and I’ve got the freedom to say things out loud and be a goose without the fear of being asked to leave because I’m disturbing the other patrons or geese.

Pitch your show to my nan

[Weeks]: We will be singing songs exclusively about how all Nan’s have heaps of sex.

[McNair]: Young Bert Reynolds will be there and will scream your Nan’s name in place of “STELLA!” if she comes.

[Bailetti]: Dear Nanna, I have a recipe for vegan jam drops that will make you Instagram famous. You might not know what Instagram is, but come to the show and Instagram will know who you are.

Why are you the creative visionaries that Canberra needs?

[Weeks]: We are the creative visionaries Canberra deserves, but not the ones it needs right now. So The show is cancelled I guess sorry everyone”

[McNair]: Canberra. You need us. If you didn’t, you would have already killed us. So what’s it gonna be? Do we have a deal?
[Bailetti]: Look at Me Now Mum is a show that just takes a really stark, hard, honest look at who we have turned into as a people. Mostly hot-ass bitches with a sick sense of humour.

Liked it? Take a second to support Ellie Windred on Patreon!

Support Ellie Windred on Patreon!
7% complete
When we reach $500 per month we will begin the official BMA Podcast. This will include interviews with some well-known musicians and artists, tips and tricks for publishing in print and online, as well as other discussion topics around Bands, Music and Arts in Canberra!