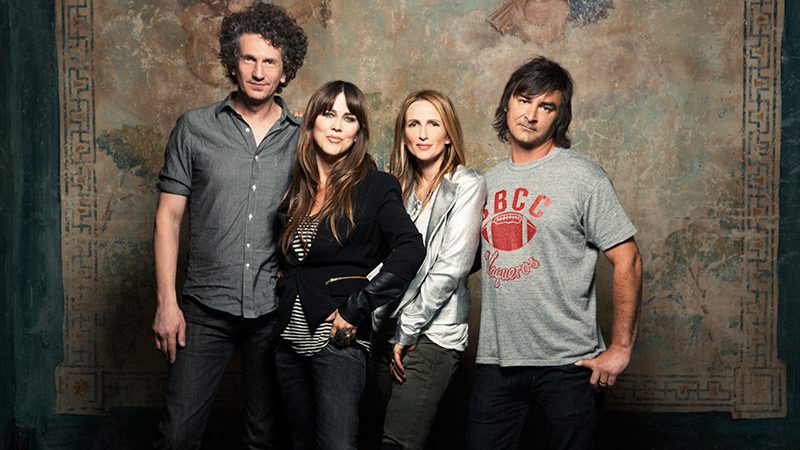 If you, like me, were a slave to the 90s grunge girl band wave, you most likely listened to Hole, Garbage, and VERUCA SALT. The Chicago-based band formed in 1992, hitting the ground running with their debut album, American Thighs, in 1994, which sported the single ‘Seether’.

1997’s Eight Arms To Hold You, containing tracks like ‘Volcano Girls’ and ‘Shutterbug’, would be their, way too soon, last album before the split. The following year, drummer Jim Shapiro quit the band, flicking over the domino effect of both Nina Gordon and bassist Steve Lack’s abandonment of the Veruca Salt name, leaving Louise Post as the last member standing.

Gordon and Post never really went into depth publically about why their friendship ended and would scarcely correspond for the next 14 years. But as the two got older and their lives evolved, the desire to reconnect became strong enough to finally make contact. After their friendship was rekindled, the original Veruca Salt members got back together, their reconnection resulting in the 2015 album Ghost Notes.

“The good news is that we all really like the people we’ve turned into.”

Now they’re coming to Australia, touring nationally with A Day On The Green, and playing the ACT’s Canberra Theatre Centre with another band boasting a story of fruitful reunion, The Lemonheads.

I spoke with Louise Post about the band’s revival and their upcoming Australian tour. We briefly talked about the splitting of the band in the late 90s. Gordon stated to the Village Voice in 2015 that their time apart was a necessity, and Post certainly agrees: “Things were so fast and furious with American Thighs that by the time Eight Arms To Hold You and the touring came around, we had to seperate, and we did that in the form of this big, acrimonious friendship implosion … We were also really surprised by the success that we had. We didn’t anticipate any of that. Sort of got the best of us, to be blunt and simplistic about it.”

When asked if the band felt different having been reunited 14 years later, she laughed and gladly said that it felt exactly the same.

“The good news is that we all really like the people we’ve turned into and it’s this big celebration of coming back together having had all this time apart to, y’know, get over our shit, achieve our personal dreams; whether it’s marriage, children, having a bevy of cats, learning to surf. We’ve had a chance to spread our wings without one another, although I can say for myself I always felt that she [Gordon] was missing because we weren’t at peace with one another and we had more music left to be made. I think we broke up prematurely in terms of our creative arc.”

Post has had some musical experience being separated from the band. She recorded a few tracks with her then-partner, Dave Grohl, and released two albums after the band’s breakup under the Veruca Salt moniker. However, it just doesn’t seem to compare as she happily exclaims that her time making Ghost Notes was “pure joy.”

“Now we get to come back together and make this third album that we never made as a band. I can’t tell you how happy it makes me. I was on cloud nine the entire time we were making Ghost Notes. To have told our story in an album is really cathartic and healing.”

In tracks like ‘The Museum of Broken Relationships’ and ‘Empty Bottle’, the band goes into all the gory details about their split and their eventual reunion. And luckily for us Veruca fans, it doesn’t look like it’ll be their final chapter.

“It would be easy to go ‘Okay, that’s that. All good now!’” she laughs. “But no, we have more to do together. We are currently talking about and playing with a yearning to make a record that is just really beautiful. Not necessarily full on rock, we just wanted to grasp that itch of making an album that we never made in the beginning before we were a full rock band. It was just me and Nina and acoustic guitars, then electric and foot pedals, and now drums. I don’t know what it’s going to sound like or be like but that’s what we’ve got our heart set on next.”

I asked Post about pairing with The Lemonheads for their Canberra show and, though the two bands don’t really have any ties to one another (apart from being huge in the same era), Post has fond memories of frontman Evan Dando from playing the festival circuit back in the day.

“We knew Evan just from playing shows in Australia and in Europe. He would tell us all the fun things to do in Australia. He’s written a list of everything to do in Australia because he’s spent so much time there. He was hilarious, he made us laugh, he had us in stitches. We thought he was charming and sweet and funny and talented. I’m sure we still do.”

If you’re planning on going to the show, I would highly recommend that you’ve listened to Ghost Notes prior so you have a full appreciation for the emotions the band will be projecting towards you that night. I’ve got my tickets stuck on the fridge, how about you?

VERUCA SALT are playing with THE LEMONHEADS on Wednesday February 28 at the Canberra Theatre Centre. Tickets are $75+bf, get them at canberratheatrecentre.com.au.