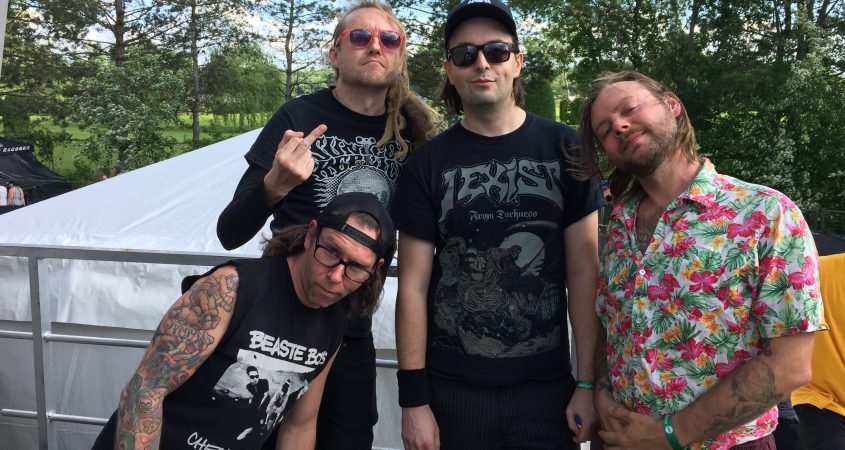 FRENZAL RHOMB, Australia’s least winningest ARIA-nominated band have just capped off a sterling 2017 campaign in doing what they do best, taking a runner-up award at the ARIAs for the 6th time with their album Hi-Vis High Tea.

While one may find cause for sympathies here, six nominated albums out of their nine studio album discography? This isn’t a band strike rate at all. On the night I tweeted my best to them shortly before the awards were announced saying “Shout out to @frenzalrhomb & hope they break their curse tonight #arias”, to which Frenzal replied with “You meant ‘hope they continue the blessing’, right?”

That’s kinda the perfect segue into the chat I have with career Rhomber, vocalist Jason Whalley. Because at the end of the day, accolades are nice, but do they mean anything and who cares?

“What an ARIA means something to is my uncle who I see once every two years, or family at Christmas. They can have an award to help them determine is what we’re doing is good or not. Like, ‘you won an ARIA, this legitimises your playing in a band skills.’”

For Whalley, he was aware they hadn’t won, but that was about it. Because the band operate in a kinda weird space with their 90s alumni.

“Ginspoon, Spiderbait, The Living End all own houses in Byron,” Whalley mused, “after 23 years, our fans and the Australian public need to know we’re ready to sell out for that V8 Supercars money. I mean the only thing we’ve not done is play a grand final of any football code. I think that’s the line of family friendly events we’ve not crossed into making that grand final Byron house money, perhaps it’s because we say ‘cunt’ a lot?”

The album that took the band to the ARIAs this year led with the lovingly animated single for a song called ‘Cunt Act’. there’s probably something in that.

That said, it’s not been all mirth and fun since their last ARIA miss, Smoko At The Pet Food Factory. Whalley played unwitting and unwilling host to a parasitic pig worm lodged in his brain, immortalised with a furious 64-second song on the album. Drummer Gordy Foreman suffered a simultaneously hideous and hilarious broken arm at a show in Western Australia teaching a fan how to stage dive properly.

Foreman’s road to recovery on that front made this album something of a comeback record, as Jay Whalley details.

“I’m used to thinking of comeback records meaning, ‘your last few records were shit’, but yes, Gordy showed off an inner toughness that he probably only discovered by going through this, and in getting back to full strength made getting through the record all the more satisfying. He tracked 20 songs in six hours. Of course we replaced him immediately after the break for shows, but then he just ‘came back’ to the band when he recovered, so in that sense I guess it was a ‘come back.’”

The band ventured to the Blasting Room studios in the USA for the second time in a row with production credits to Bill Stevenson and Whalley, who runs The Pet Food Factory recording studio in Marrickville, Sydney.

“We could record anywhere as we really demo everything to the point that pretty much all the ideas are worked out before we go into the studio. Going to Fort Collins makes it more like a holiday. I mean, we go in and do our royal best, but we get to have a good time too.”

Going back a second time though yielded, in my opinion, a better result that Smoko. I thought that album’s guitar sounds were a bit dominant, with a bias toward higher timbre frequencies.

“Those are some fancy words, but I agree that the production is better on Hi-Vis, everything is more even and just better.”

I also felt that Tom Crease on bass and backing vocals was the MVP for this album.

“Tom is the melodic crutch upon which my decaying voice can rely on for the melodies I have in my head when I write the lyrics. I have worked out a way to record my vocals where I harmonise a lower note and leave Tom to do the higher part and that is working well as my range gets lower.”

2018 beckons and while another album is still a ways off, there are quite a few shows on the horizon which hint toward that “supercars money” we discussed earlier that are a bit too soon to announce. Hopefully that will see the band finally join the Fuck My School Reunion housing market in Byron.

“Do you know who won that ARIA?” Whalley asks. Who cares Jason? We’re in safe hands with the Rhomb.

Frenzal Rhomb play the Basement on January 5. Tickets $34.70 through Oztix.