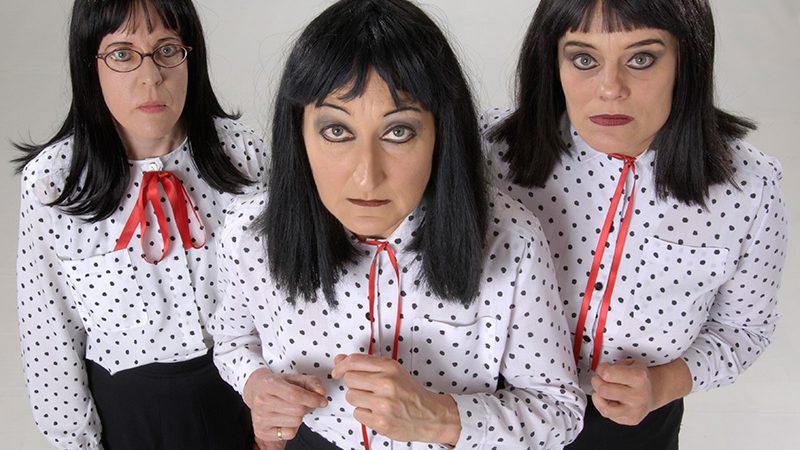 The KRANSKY SISTERS are an award-winning musical comedy trio created, written and performed by Annie Lee, Christine Johnston and Carolyn Johns. Characters Mourne, Eve and Dawn Kransky hail from the little town of Esk in the wilds of Queensland, where time, social customs and technology have advanced at a slower pace than most of modern Australia.

Having previously toured Canberra with their show Piece of Cake, they are back with a Christmas show featuring tall tales of their town and travels, and their reinterpretations of popular songs. I spoke to Annie Lee who plays Mourne in the trio, on Melbourne Cup Day. Asked if they were doing anything special for Cup Day, Mourne said, “We thought that we’d ride on some Shetland Ponies, just to get in on the action. Mrs Boyle’s son is coming, and he’s going to bet on us.”

“Don’t tell anybody, but I go around the supermarkets and crush [Easter eggs] with my fingers. I love the sound it makes.”

Kransky family secrets about Christmas festivities and stories of past celebrations will be revealed in the new show. Mourne said that the sisters never used to look forward to Christmas much, as they only spent it by themselves.

“It was a bit flat and lonely, but now we’ve got our Christmas show and we can go and share it with people.” They had simple times, making treats and popping crackers. Mourne especially liked the Chinese ones with a thought for the day.

“You know, turn around twice and you’ll turn into a rabbit, things like that.” They play I Spy around the house too. “Dawn is useless at I Spy. She doesn’t speak since her mother left, but she points, which gives it all away.”

The sisters are not bothered by the extreme commercialisation of Christmas: “We don’t mind them as we don’t go shopping very much.” Their main interest is snapping up years’ supplies of reduced price puddings, after Christmas. Mourne looks forward to Easter more. “They have all those chocolate eggs, and I like to pop them. Don’t tell anybody, but I go around the supermarkets and crush them with my fingers. I love the sound it makes.”

There is a strong musical aspect to the show too. “Lots of songs which we’ve learned for the lovely people, from our wireless at home, including some modern songs.” The setlist includes material from artists as diverse as Daft Punk, ABBA, The Carpenters, Nana Mouskouri and even Sia. As Mourne says, “Now you Sia, now you don’t.” Gotye makes an appearance too.

“My uncle used to have a goitre, but you don’t spell it like that. There’s also one by the man who dances like a horse. We don’t like to say the name, it’s a surprise.” The sisters saw the ‘horse dance’ on a neighbour’s television as they have never had one of their own.

“Our mother forbade it in the house. Mother said it was evil.” There will be songs by Santa too, although the sisters find some of those quite scary. “You’ve got to be careful, you know. Santa is always watching us.” Asked about whether there will be any dancing Mourne said, “We will be doing a little bit of dancing, because Christmas time is a time to move one’s body, to music.”

Mourne plays the guitar, donated by a neighbour, as her main instrument. “He was staring through the windows a lot, across the road, for many years. He finally gave me a broken-up guitar, so he was obviously just looking for the moment when he could give it to me.”

The sisters like to use domestic objects for musical accompaniment, with Mourne playing the rice shaker and cheese grater, and Eve playing the toilet brush and musical saw. I asked if it was hard to keep up with popular music using the old wireless, now that a lot of music is distributed digitally.

“We’ve caught on to the modern stations, but our wireless had a mind of its own. It moves around all over the shop, from one station to another. We’re just learning one song and it will switch to another station, you know, and it makes it hard when we’re learning a song.” Sometime the sisters only hear part of the lyrics, and have to make up the rest of them.

The sisters traditionally wear their black and white ensemble for their shows. Even though it is Christmas, they are unlikely to be wearing anything more festive. “I don’t know about these modern clothes. There’s no material in them and short skirts cost the same as ours do, so I don’t see the point in changing our fashions.” They will, however, compromise by wearing a Christmas bow. Also, they do not want to change outfits and confuse their fans, as some audience members like to attend, dressed in the same style as the sisters.

The Kranskys are looking forward to another Canberra visit. “I like the round, circular streets. We get lost in the Morris sometimes, and end up turning around in circles for a long time.”

THE KRANSKY SISTERS will put a completely different spin on the festive season at The Playhouse at 8pm on Wednesday December 13. Tickets $55 + bf at canberratheatrecentre.com.au.