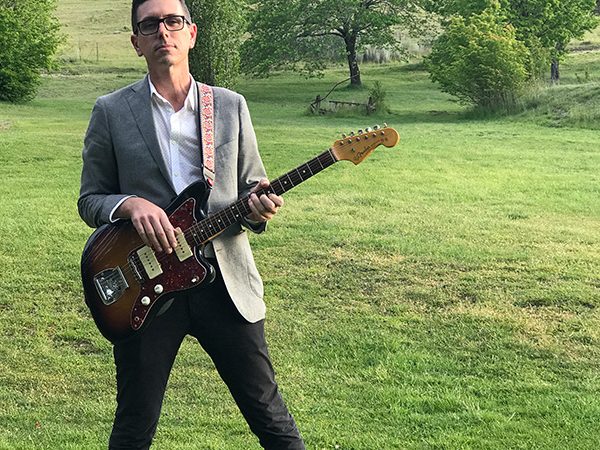 WATERFORD was never necessarily meant to last beyond its first gig. My friend Pete Huet was on a late 20s backpacking tear through America and Europe, seeing all the bands we’d discussed and critiqued over the past few years of earnest music nerd chat.

One evening, possibly in his cups, Pete emailed a plan from an internet café in Edinburgh. We’d both been critics, promotors and DJs, men who had dabbled in every element of the industry without having had a crack at the most obvious piece of the rock puzzle.

I asked a guitarist friend to play drums, mistakenly thinking that drumming was easy. Another friend offered keyboard and rhythm guitar, though we later learnt that he never turned the volume up on either instrument on stage, too mortified to have a mistake audibly apparent. It made little difference – one rehearsal in and I was smitten by the noise smashing out of a rented Marshall stack. We were all in.

“We feel like we’re only starting to do our best work. That’s why we carry on.”

So a barely competent but enthusiastic beat combo was born out of the tunes I’d half written, shaped by Pete’s chirpy chutzpah. We played that first show at a Monday Bootlegs session in December 2007 and were amazed by a full house that didn’t demand our removal from the stage and the town. Turns out it was fun.

Since that show we’ve played over 100 more. We’ve shared the stage with our all-time rock’n ‘roll heroes, had our songs played on the radio here and overseas, read kind things about the band in big newspapers and tiny blogs, and somehow managed to endure.

On Friday December 1 we’ll release a new tune, called ‘Charades’, and on Saturday December 2 we’ll play the Phoenix again, ten years after that first gig. Endurance itself is no big thing – anyone can loiter beyond their welcome. For us, we feel like we’re only starting to do our best work. That’s why we carry on.

Every band has to believe that, regardless of how true it is. That’s one thing I’ve learnt. Here’s a few other tidbits I’ve picked up, about music, being in a band and our little city that could.

IT’S ALL ABOUT THE ROOM

No one is making any money in music anymore, certainly not those playing it. Which means the structure that facilitates the old narrative of a band breaking out is broken too. We’re living in a time of a million micro-scenes, and if you’re bold enough to want your music heard beyond one, played here and elsewhere, it’ll come down to the community you build with other artists and obsessives. If you want people at your show, get to other shows. That’s your base, and without that you go nowhere. Music is full of shy types, angular and awkward folk, but the community is what sustains you and your efforts. So get down the front, be loud about liking that song, ask the guitarist why she chose that delay pedal, tell the drummer the final song of the set fucken ruled. Good things will follow.

SUPPORT WHAT SUPPORTS YOU

It’s not just the other sonic gunslingers you need to tip your hat and spare change to – it’s the venues who let you make your unholy racket within their walls. Each bar that hosts original music here and everywhere in Australia could make a bunch more money with covers bands and pokies. So when you’re not playing, drop by The Phoenix, Transit, The Basement, The Polo, The Front, Smith’s, anywhere that hosts local artists. Buy a drink. Do that often. That’s one of the biggest contributions you can make to keeping this city interesting (and making it more so).

CANBERRA SHOULD BE A SCENE

I was convinced in 2011/12 that Canberra was the next place to break through, become one of those music cities you read about and consider moving to. How could we not? We had Hoodlum Shouts, the Fighting League, Voss, we had house parties and good venues, a strong DIY work ethic, cool labels like Dream Damage, Birds Love Fighting, HelloSquare and Cinnamon records, and a scene that defied the brand Canberra was widely associated with. And then, things went the way they do. Many bands moved, or individual members left town and the bands lost momentum. That doesn’t mean it couldn’t happen again. The city is expensive, and that makes it tough. But as Shoeb Ahmad says, we should be the equivalent of a DC, or Chapel Hill, if not the full Portland or Manchester. I’m not saying don’t travel and gun for new experiences. I’m saying that if you think your music will be best served by moving elsewhere, you may be wrong.

YOU IS WHAT YOU IS

There is nothing fashionable about Waterford. Given that we were 10ish years older than the crowds and the bands playing with us when we started, we quickly became comfortable on the fringe. Likewise, we make a kind of music that is familiar but a bit wrong, wonky, slanted or enchanted. We’ve tried to veer into new territories, noise and drone and sub-Mancunian indie dance, but over time it’s become clear that there is a sound, for better or worse, that’s ours. I’d argue that’s our greatest strength, though it took a while to recognise it. We’re those old dudes playing indie, and even though guitar music is at an all-time low on the cultural relevance scale, so what. We will remain those old and increasingly older dudes doing what we do. So do what you do, and keep it at.

Liked it? Take a second to support Glen Martin on Patreon!

Support Glen Martin on Patreon!
11% complete
When we reach $500 per month we will begin the official BMA Podcast. This will include interviews with some well-known musicians and artists, tips and tricks for publishing in print and online, as well as other discussion topics around Bands, Music and Arts in Canberra!