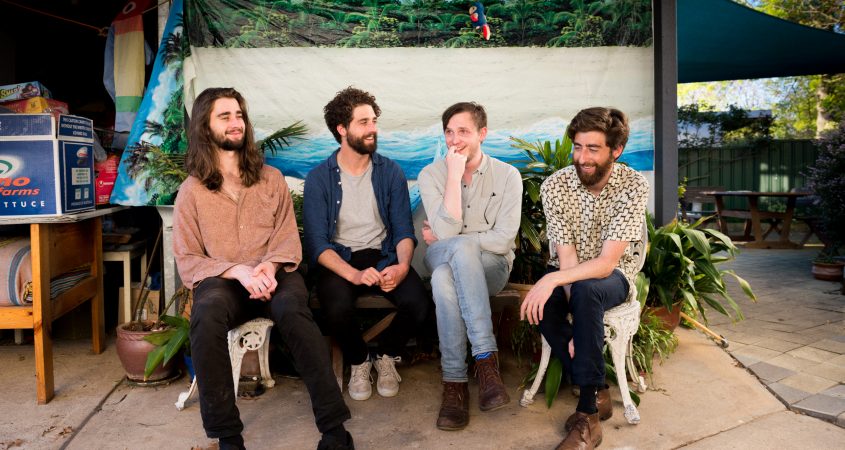 Late nights, whiskey and lopsided synthesisers, all through the lens of the morning after. That’s the scene Slow Turismo set with their shiny new single, ‘Pistol Powder’.

Except this is anything but glittering pop music. With production duties shared with Safia’s Ben Woolner-Kirkham, the band escape the self-called “slickness” of their early work and come out sounding the most ‘them’ they ever have.

The band took some time out ahead of their east coast tour dates to talk us through the track’s inspiration, one YouTube clip at a time.

Homeshake – ‘Give It To Me’

Homeshake is a band that is on high rotation at home. It’s pretty hard to pick a single song as it’s more his overall sound and vibe that influenced the making of ‘Pistol Powder’. The wonky synths, bass lines and beat with silky vocals on top are a damn fine mix! It’s laid back but so groovy at the same time.

What a tune! Brittany Howard’s voice is absolutely incredible! Its super hard not to get swept up in the power and control that she has. Everything about this song, from Brittany’s voice to the instrumentation, arrangement and overall mix seems completely considered, yet it still has a really raw feel.

This song like many of the others on the list was and still is, on high rotation around the house. Apart from the slightly obvious rip of Conan’s high vocal treatment, the overall shape and effortless groove of most songs on Soft Hairs album were a big influence for ‘Pistol Powder’.

This is a bit of an obscure one. It’s such a great song though if you have a lot of time to spare and are in an open frame of mind. There’s a certain ‘slickness’ to some of our old recordings and that’s something that we’ve deliberately moved away from. Similarly to Homeshake, Conan was part of the inspiration for that move. Everything is so wonky and loose and we love it.

Wings – ‘Arrow Though Me’

Such a cracker! We’re all massive Beatles fans and weirdly had never delved into Wings, such a mistake. The whole album is great, it’s their last and almost has a similar vibe to Abbey Road. It’s experimental and so detailed, this track in particular is meticulous. It’s nearly 40 years old but you could be forgiven for getting it muddled with someone like Thundercat or Childish Gambino. The bass, beat, vocals, horn hook…brilliant.

Norah is actually an old favorite of ours. Despite being quite far from the genre we have drifted toward, there is so much in this album that has influenced us. Happy Pills is toward the end of a quite heart-breaking album, and its lyrics can be quite dark at times. Although this whole album is amazing, ‘Happy Pills’ stands out in contrast to the rest for its happy, hook driven vibes, while still maintaining a melancholic theme in the lyrics. This contrast between the mood of the lyrics and music is something that we were very much aware of when writing ‘Pistol Powder’.

We have spent a lot of time in the studio over the past 10 months and Ben has been kind enough to be there for most of it. Even though Safia are in a different world genre-wise, Ben definitely knows his way around song structures! ‘Pistol Powder’ was actually nowhere near the top of our list of potential singles even though we loved playing it. Ben liked it straight away though which gave us the confidence to get a little weird, incorporate a bit of space and release it as a single.