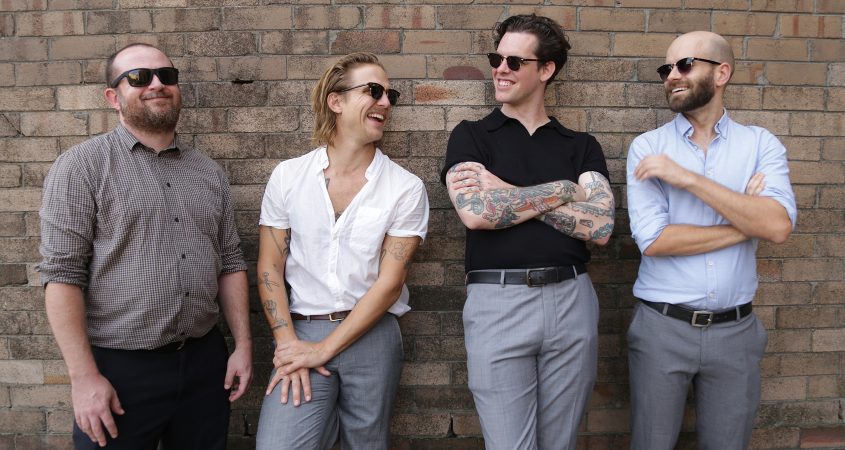 After ten years of mayhem, blues rockers THE SNOWDROPPERS are calling it quits. However, they are hitting the road for a final series of shows, playing Too Late to Pray in full, plus a selection of favourite hits, and BMA spoke to screaming frontman Jeremy Davidson (aka Johnny Wishbone) about the band’s heritage.

Asked about the reason for the band’s dissolution and if it was a matter of life getting in the way Davidson said, “We’ve been at it for ten years and it’s just sort of time. There’s no bad blood, and we just want to go out with a bang, rather than fizzle away after 11 or 12 years.”

The Snowdroppers debut was playing at the burlesque variety show Good Drugs and Bad Women. Davidson remembers it as one of the bigger gigs the band played, although the punters were there for the ladies, rather than the band. “I remember being petrified. I don’t remember much of the gig itself, apart from the fear. We played a few of our own originals, and it was exciting.”

“I don’t remember much of the gig itself, apart from the fear.”

The band evolved its style over three LPs, with Moving Out of Eden having a stronger rock sound. “For us it was a natural progression, moving away from a rockabilly-country sound to a bluesy rock sound. I think all of our stuff retained its ‘bluesyness’ over the years.” Asked about whether Too Late to Pray has a special place in band members’ hearts Davidson says, “I think it holds more of a place in our fans’ hearts, maybe. It’s the one we get the most requests from. Maybe that was our peak; we peaked too early and it was all downhill from there. So we thought, let’s revisit the glory days.”

Extra shows have been scheduled in Sydney and Melbourne as initial gigs have been sold out. “It’s been pleasantly surprising. We were not expecting it at all, so it’s really humbling.” On best gigs, Davidson recalls, ‘There have been so many, but I always remember Bluesfests. They were just fantastic, to play a crowd that size was an incredible experience. It was humbling for people to take time out to see us, when they could have seen a myriad of other more professional bands.”

The end of The Snowdroppers does not mark the end of the line, musically, for Davidson. “There will be period of reassessment, perhaps mourning, after the final show. I have some solo stuff in the works, with JD and the Hungermen.”

The Snowdroppers, with special guests the Barren Spinsters and Teen Jesus and the Jean Teasers, will have their Canberra farewell at the Transit Bar on Saturday October 21. Doors at 8pm. Tickets $25 +bf available through Moshtix