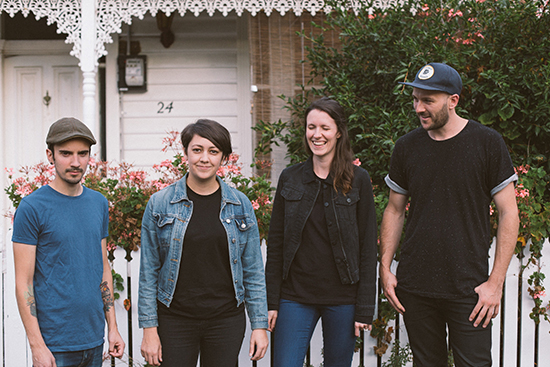 Melbourne indie pop/rock quintet, Self Talk have announced their upcoming Almost Everything EP featuring six dynamite tracks, which will be released on Friday August 11. Wasting no time, the band will hit the road the day after the EP release, co-headlining an Australian tour with Brief Habits in Canberra. They’re playing The Phoenix on Friday August 18, along with local legends Helena Pop and Slagatha Christie.

Self Talk formed in 2014, when Stacey Cicivelli (vocals/guitar) found herself in a songwriting frenzy that led her to bring on board Frank Morda (drums), Michael Keirs (guitar), Amanda Norman (keys) and Brendan Aked (bass), and combine their talents to flesh out the acoustic skeletons. With a 90s influenced wistfulness, punk energy and dash of pop that has become Self Talk’s signature sound, the band are inspiring through heartache and hindsight, nostalgia and new beginnings.

Having toured with local favourites such as Ceres, Luca Brasi and Paper Thin, in late 2016, the band reunited with producer Aaron Dobos (British India, Ceres) to record their latest offering at Sing Sing Studios. With the first single, ‘Old Habits’ released in April – receiving airplay and glowing reviews from triple j announcers, the band is excited to release the second single, ‘Bedside Dictionary’.

The nostalgic number is about, “relationships that don’t really get past the beginning, not because they don’t work or the people involved don’t like each other, but it just doesn’t go any further. Its about the various things that come with that, how it might feel, the frustration or disconnection, or even just acceptance really”. The official music video will be released later this month.

Pre-orders available digitally via Inertia Access (where both ‘Old Habits’ and ‘Bedside Dictionary’ singles will be available to download instantly), and on vinyl via Lost Boy Records.