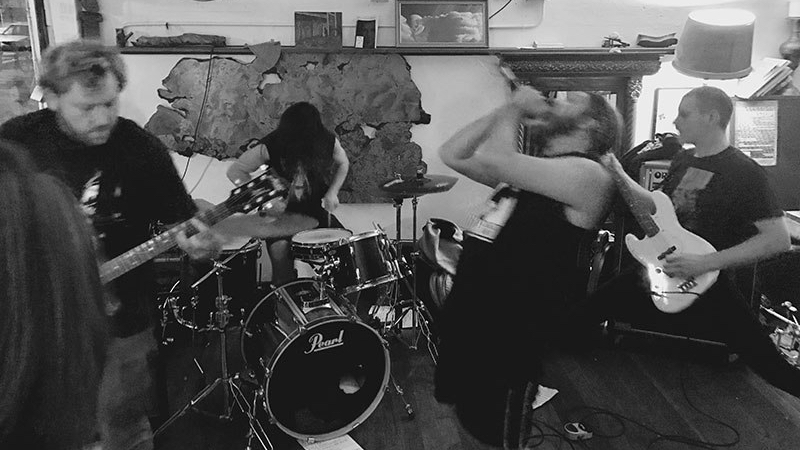 This was the night when I had to make the very difficult toss-up between this gig and the monster line-up that went with Toe to Toe at the Phoenix.

I’m happy with my decision. As soon as I opened the door I was slapped in the face with a wall of sound (I came a few songs into Fight Milk’s set, I am so pissed I didn’t catch the whole thing). I’ve heard whispers of Fight Milk for a while now, but this was my first experience as a member of the crowd. They were all I’d hoped for. Knowing a couple of the members from their other bands, I had every confidence in them to melt my face off. Cheers, fellas.

As Masochist starting setting up their gear, I already knew this was going to be badass just from the look of the frontwoman. I have to give major props to this girl for her persistence in finishing a full set. It was clear that she wasn’t well; her throat sounded very unhappy, but she just said, “fuck it, let’s do it,” and carried on, much to my appreciation. You are rock ‘n’ roll.

Disparo! transformed as they took up their microphones, guitars and drumsticks, from sweet-faced, polite lads, to high-energy maniacs insistent on making our ears bleed as we took on the g-force from their presence. The front man was a captivating and unique vocalist, the bassist had a leg stance possibly more impressive than that of any of The Ramones, and the drummer was just a blur as his arms moved at superhuman speed and he swung his hair in such a way that I thought his head might fly out the window.

My pick of the night was definitely Masochist. Fucking bad arse. As soon as they finished their set and said they had shirts and EPs for sale, I threw my wallet at them.

Bonus tip: If you are going to frequent gigs like this, don’t be me. Bring ear plugs. Take the edge off. I am suffering for it today. Rock wisely, my friends.