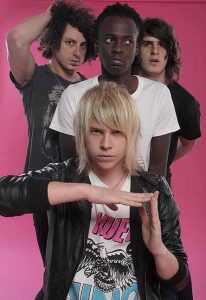 WARNING WARNING WARNING: Transformers are invading, robots are attacking and THE GALVATRONS are finally coming to town. For those who are painfully unaware, Galvatron is a transformer closely related to the Megatron whose unique power is… Scratch that, a more valid point to make is that the band Galvatrons are the newest addition to the Australian music arena (if you want to discuss transformers I confess I know nothing).

The band is made up of Jonny Galvatron, Manny (Lady Killer), Condor and, last but not least, my brother in arms and my brother through blood, Peter… I mean Gamma. Nepotism aside, I am increasingly amazed at the calibre of music Galvatrons have produced. I was able to catch up with my brother for an interview and, after passing on the long list of messages that my mother wanted me to deliver to my somewhat elusive sibling, we were free to discuss the long or rather the short story of the ’Trons. So I did what any sister would do and went for the tough question like a punch to the stomach; I told him that people thought their band was an overnight success to which Gamma laughed and said, “We have all been in bands for years, playing with different people that we have learnt a lot from. Sure, this is the band that went somewhere and, granted, it was in a short period of time, but it doesn’t mean we haven’t worked our arses off in the past year and in every band before that.”

In the beginning: “We played a lot of club gigs. Mostly small clubs around Melbourne and usually the midnight shows and a lot of back to back gigs.” And through constant gigging the band developed a cult following for their music which Gamma describes as “high energy electro rock”. During the closing months of 2007, Galvatrons played gigs with The Divinyls, You Am I and played at Meredith Music Festival. In early 2008 it was Melbourne Big Day Out, showcases in London and a tour with Shihad, and, if that wasn’t manic enough, they continued to play gigs in Melbourne and record their new EP When We Were Kids, which will be released on May 3.

Seeing as he is pretty much living the dream, I asked Gamma to describe the experience in terms of an ice cream flavour. “Butterscotch candy ice cream. It’s like the intense ice cream flavour with little bits of candy goodness.” Galvatrons are now touring Australia to accompany the release of their EP. After the tour they will play Come Together Festival and return to the UK to play the O2 Festival, Download Festival and Hyde Park Calling with The Police.

They will be arriving in Canberra (or as Gamma calls it, “the little city that could”) on the May 1 at the Transit Bar. If you want more information, stalk them at www.myspace.com/thegalvatrons (don’t feel weird about it, I do it all the time). And, at most, come and see them play on the 1st, embrace the inner transformer geek and spread the robot love.

Bring your favourite plastic figurine to Transit Bar on Thursday May 1. The Silents will also be transforming your music mind. Free entry. Disclaimer: It’s a) weird interviewing your own brother and b) calling him Gamma!

Liked it? Take a second to support Eva Lubulwa on Patreon!

Support Eva Lubulwa on Patreon!
12% complete
When we reach $500 per month we will begin the official BMA Podcast. This will include interviews with some well-known musicians and artists, tips and tricks for publishing in print and online, as well as other discussion topics around Bands, Music and Arts in Canberra!